It’s all true. The federal government has led an application to begin smearing Gorilla Snot over the toxic site of the former Giant gold mine outside Yellowknife.

From there, this story gets significantly less exotic.

Gorilla Snot is a form of dust suppressant – well, we did warn you – designed to ensure dust from the mine’s tailings ponds, and  from preparatory work for full remediation of the site, doesn’t spread to nearby communities like Yellowknife, Ndilo, and Dettah.

Dust suppression is an important annual activity (https://www.aadnc- aandc.gc.ca/eng/1524236988828/1524237035652) at the site. In the past, clouds of dust attributed to the Giant site and spotted by local residents have caused considerable concern (http://www.cbc.ca/news/canada/north/giant-mine-s-tailings- pond-dust-blows-toward-yellowknife-again-1.3083013).

In those instances, the federal government – which inherited responsibility for the mine’s clean-up – said there was no immediate risk to public health. In 2015, the clean-up team told CBC “very little” toxic arsenic trioxide material was contained in the dust, compared to 227,000 tonnes of arsenic trioxide buried beneath the mine.

The choice of Gorilla Snot as an option for 2018 suggests the federal government is still working to identify the best dust suppressants for use at different areas of the site. Gorilla Snot is the third option added to the feds’ arsenal in three years, following Soil Sement in 2016 and Soiltac in 2017.

The Giant Mine remediation project’s notification of its plan to use the substance, submitted on May 9, was published to the territory’s regulatory registry this week.

In order to use any of these suppressants, contractors working at the site have to present the substance’s chemical details to regulatory officials for approval.

Gorilla Snot’s manufacturer says its product’s “unique surface  crust remains light and flexible yet strong and durable resulting in long-term performance capable of withstanding intense environmental conditions,” claiming it will not wash off with rain.

The manufacturer claims it is “practically non-toxic to all species” under American guidelines and “not known to pose any ecological problems.” 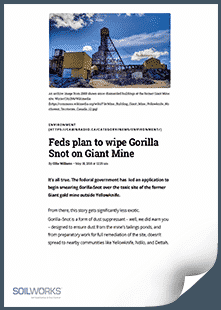