C. Cook called the meeting to order at 12:05 p.m. No conflicts of interest were declared by Advisory Board members.

S. Koberg updated the Advisory Board on Red Hawk.

We submitted our department budget last week. As part of our submittal packet, a supplemental request in the amount of $45,000.00 was requested for Red Hawk for the construction of 2 separate non-motorized Foothills trails totaling approximately 4 miles.

M. Edwards presented a PowerPoint presentation of the work that has been completed at the Bike Park in the last month including 2 major projects.

The biggest focus over the last month has been building retaining walls around the jumps on Stormin’ Mormon. Originally, sandbags were used that they have deteriorated. Large rocks were brought in and chisels and hammers were used to make the rocks fit together. Mike showed photos/videos of the work as he explained the process of rock splitting.

The second major project is the reroute of Shake n’ Bake where the bridge goes over Junk Yard. A couple of reroutes were flagged and Scott and Mike met to discuss a couple different options. Mike then met with BAMBA and they decided on the route they preferred. Mike went on to show a short clip of the finished reroute.

M. Edwards went on to discuss the Summer Projects list. Most items have been completed but items that remain are building rock walls around the cannon jumps, armor landings on Flow Trail with Soiltac® and armoring 3rd bermed corner on Shake n’ Bake.

M. Edwards and the Trail Crew met at Hubbard Reservoir and discussed projects that need completed.

Mike also met with K. Danley regarding horse related issues at Hubbard and other trails.

Our department has been trying to close out an ITD grant for Oregon Trail to purchase easements. There are 5 properties that needed revisiting. Letters went out to these 5 property owners with 2 responses.

S. Noyes updated the Board on E-Bikes in Eagle. The first opportunity for a meeting is June 6th from 3-5PM to discuss E-Bikes. Eagle police, Ada County and e-bike users will be represented. Currently

there is no code on the books for E-bikes. The Boise ordinance will be used as a template for Eagle’s ordinance to stay consistent. The majority of Eagle’s trails are downhill, bike optimized trails. Eagle wants to start with a policy that makes sense to everyone. The parties went on to discuss among themselves their thoughts on E-Bikes and past discussions the Parks Board has had on the Foothills Trails. A main theme of this conversation was consistency and enforceability. C. Cook inquired if there has been discussion at Ridge to Rivers meetings regarding E-Bikes and the Bike Park. S. Koberg doesn’t recall any conversation on this. C. Cook went on to inquire if any of the trails at the Bike Park are Ridge to Rivers. S. Koberg responded that no, they aren’t. S. Noyes hopes to submit an E-Bike’s ordinance draft on June 21st.

S. Koberg presented a PowerPoint overview of Oregon Trail recreation area and provided background and history regarding the site.

The future of Oregon Trail includes closing out of ITD Grant Agreement; update existing features inventory; treat trailhead for weeds; work with BLM to create trailhead parking and kiosk near Columbia; create, fund and implement trail plan and create; fund and implement enhancement plan that may include restrooms, shade and trail signage.

Options to consider for the Advisory Board include establishing subcommittees and scheduling and participating in site visits.

K. Kostka asked for clarification from J. Keller as far as visiting these sites on one’s own time or to schedule coordinated meeting for site tours. J. Keller responded that group tours can be hard for everyone to attend and that weather can make it impractical at times. He suggests that Board members go out on their own time.

K. Kostka inquired if there was anything else that needed to be done to follow through with Jim’s idea for Advisory members to visit Ada County properties as far as documenting that these sites have been visited. C. Cook suggested that if M. Edwards would be out at a site that he let the Advisory Board know so they could visit the site as well. J. Keller suggested that for future meetings, Board members could mention if they have been to one of the properties, that way it is on the record.

K. Kostka moved that a standing agenda item, Member Field Trip Update, be added to the agenda for the next couple months.

S. Koberg updated the Advisory Board on the Penitentiary Canal Greenbelt Project. June 22nd is the expected opening of the path. There were some issues with about 300 feet of asphalt that was cracking. The contractor has been asked to redo this section. The Commissioners are not available for a ribbon cutting on June 22nd. A potential ribbon cutting in July is now being planned. 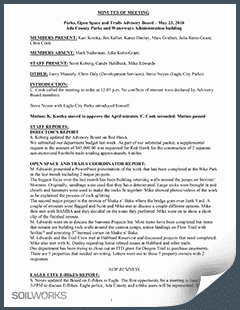