The release of a chemical warfare agent (CWA) at staging facilities such as Airports and Seaports of Disembarkation (APODs/SPODs) can hinder operations until the hazard is mitigated. A chemical-wide area decontamination (CWAD) procedure is required to more rapidly mitigate this hazard and will enable forces to maintain operational tempo. However, decontamination of large areas requires a decontaminant which is inexpensive, easily sourced, readily applied, and effective on multiple highly heterogeneous surfaces. Moreover, laboratory studies of asphalt, concrete and soil are complicated by intrinsic variability in the materials making extraction and analysis of performance difficult. In order to overcome traditional challenges faced in testing these types of materials, experiments were performed using smaller coupons, specifically designed to give higher reproducibility and throughput compared to real-world samples. Several decontamination approaches were compared including traditional formulations using standard oxidants, hydrolysis based decontaminants using basic aqueous glycol mixtures, and barrier polymers typically used for trapping volatile organic compounds. Initial studies focused on determining which chemistries and approaches proved the most effective at reducing residual agent. These studies will guide formulation efforts aimed at providing an effective and logistically feasible procedure for CWAD.

An initial screen of the selected decontaminants was performed on asphalt and concrete using VX and HD. A 2’’ panel was contaminated with 5µL of agent, and aged for 24 hours. Decontaminant was applied, and then quenched after 4 hours with sodium thiosulfate. Panels were then extracted and the extracts analyzed for residual agent.

The initial results show that a large number of decontaminants chemistries effectively remove HD from concrete. For VX, several decontaminants give ~90% efficacy, while ammonium and sodium persulfate proved highly effective.

As simply aging the panel did lead to a substantial reduction in the mass of HD, the log reduction versus the weathering control is a useful analysis metric. A summary of these results is provided in Figure 5. Aqueous decontaminants (blue) proved more effective then the deicer formulations(orange), likely due to the decreased decontaminant solubility. A formulation of KOH applied at 40ׄ°C proved effective but small amounts (5%) of the toxic byproduct EA2192 were detected for VX.

Figure 5. Log Reduction versus weathering controls for HD and VX.

Figure 6. Residual contaminant after decontamination procedure for HD and VX on asphalt sheets

High decontaminant efficacy for both HD and VX on concrete indicates that many decontaminant solutions are highly reactive. Therefore the lack in efficacy on asphalt sheets cannot be attributed to poor reactivity, but rather poor accessibility to the agent entrained within the asphalt panel. The difficulty in decontaminating asphalt is two fold. Firstly both bitumen and the agents are non-polar, allowing for VX and HD to readily soak into the bitumen layer of asphalt. Secondly bitumen ishydrophobic, preventing decontaminant penetration into the material. This can be see in Figure 7, where ammonium persulfate, a highly reactive decontaminated, fails to penetrate into the asphalt.

Another hazard mitigation strategy is the use of barrier chemicals to create a polymer barrier which locks in chemical agent and prevents vapor and contact exposure to unprotected personnel. A variety of polymer chemistries used in soil stabilization, site remediation, and dust suppression have been identified as potential candidates. Current efforts focus on determining how effective these polymers are at reducing the contact and vapor hazard of a contaminated surface. These chemicals may provide an alternative to reactive decontaminant technologies.

Figure 8. A variety of polymer protectant chemicals selected for study.

The ability to pass through a contaminated area without the need for thorough decontamination of all vehicles and equipment is important. The purpose of    this    experiment    is    to determine whether a wide area decontaminant is needed to reduce the contact hazard posed   to   vehicles   traveling   through a contaminated   area.   The   contact hazard posed by a vehicle rollover can be assessed   using   a   short-duration, high- pressure contact of a panel with a styrene-butadiene rubber (SBR) sampler. Current work focuses on developing a way to measure that contact hazard. Through using an arbor press with a rubber sampler, we aim to simulate that rollover event and to measure the approximate contact transfer to that material.

Analysis of the post-decontamination vapor hazard is a key goal for analysis of decontaminant performance for both the reactive and barrier decontaminant technologies. However, no studies have attempted to utilize the vapor microchamber and solid sorbent tube system to analyze vapor off-gassing from concrete and asphalt. In order to design an effective pull schedule for the vapor test, a vapor screening test has been performed to provide an initial estimate of the vapor concentration profile. This is the first step in analysis of the post-decontamination vapor hazard for both barrier and reactive decontaminant systems.

Figure 7. Vapor profile for HD on steel, bitumen and concrete.

This research was funded and supported by the Defense Threat Reduction Agency (DTRA)/Joint Science and Technology Office (JSTO) under project CB10662. The authors thank Drs. Charles Bass and Glenn Lawson (DTRA JSTO) for their support and helpful discussions. The views expressed in this abstract are those of the authors and do not necessarily reflect the official policy or position of the Department of Defense or the U.S. Government. 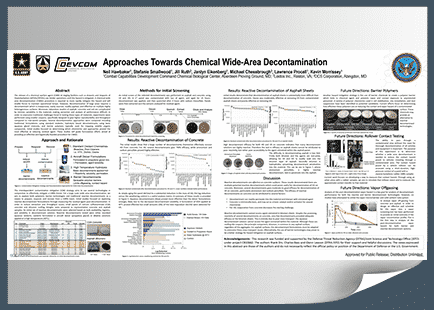