ENGINEERING LABORATORY TESTS Results of Soiltac treatment on dry sands. Report shows the Unconfined Compression Strength measured in laboratory tests and the stability of chemical reaction. The optimum of water content with the percentage of the viscoelastic additive is computed. The Strength of a very loose sand without any cementation is increased to an average of 500 KPa with a stable reaction. The Report shows an example of computation of Seismic Load Verification.

1)   Preparation of samples and test method

300 grams of sand has been mixed with fluid Soiltac and water. Samples described in this paragraph are treated with Soiltac and only one of them is mixed with water in 10 grams plus viscous fluid. Three equal amounts of fine sand with uniform distribution of grain size are remoulded with 75 grams of Soiltac with or without water. Third sample has been obtained using only Soiltac with an amount of 100 grams. Samples have been cured for 4 days at the humidity and temperature of the laboratory. A very loose material without cohesion and strength has reached a remarkable consistency after the period of curing; see figure 1. Samples are cylinders with dimension: 4 – 5 cm of diameter and 8 – 9 cm height. Samples were compressed by a ramped increase in the axial strain along the vertical axis. The same velocity of straining of few mm/minute gives the curves reported in figure 1. The curves are the constitutive behavior of the treated sample in the UCS (Unconfined Compressive Strength) versus Axial strain –Y,X axes. UCS is the Unconfined Compression Strength measured by the dynamometer. The maximum peak value obtained for UCS is 700 KPa for the sample treated with 10 grams of water and 75 grams of Soiltac, in the curve in blue. The other two tests have reported a lower strength and the increase of Soiltac has not produced the same beneficial effect for the treatment with water and additive.

Figure 1: Effect of Viscoelastic treatment of dry loose sand with Soiltac with water and pure Soiltac.

To understand the effect of different Soiltac concentration with water, two sets of samples were prepared to investigate the optimum mix design for the foundation viscous-plastic dynamic response. The sets were treated with 10 grams of water mixed with: 20 – 40 – 60 grams of Soiltac and other 3 with 80 – 100 – 120 grams with same 10 grams of H2O. The results of the experiments are depicted in figures 2 and 3. Loose dry sand was an amount of 300 grams.

Results show that the additive produced by Soilworks is very effective and the maximum value of shear strength obtained is 1580 KPa that is the compressive strength of a shale or a weak rock. The results confirm that the product is suitable for the mitigation of the seismic load due to inertial forces induced by Earthquake.

3)   Entropy and stability of the reaction.

In order to assess the stability of the fluid mix in equilibrium with the environmental boundary conditions, the peak strength of the sample are plotted versus the percentage of the Soiltac filtrated in the porous matrix. Figure 4 reports the data of the maximum strength recorded by the dynamometric measure of the laboratory triaxial cell and the ratio between the Soiltac weight and the water in grams, so 1 to 10 is the composition of the fluid mixture. Gas phase of humid air is needed for the reaction with solid grains. Samples were cured for 1 week.

The points are correlated with logarithmic function in order to visualize the optimum for the mix design. Correlation value is low, in order of 83%, but the number of samples is only 6. Equation can be written as:

Maximum value of Resistance or Shear Strength is for ln(X) = 0, that is X=1. The value of 1, represents the stoichiometric equilibrium of the 2 fluids. In this case UCS is 1741,5 KPa. However, this value is not the one that represents the environmental equilibrium because water content can change due to rainfall. To obtain the hydrothermal equilibrium, the derivative of Entropy must be zero, when X=1:

For the maximum value of 1741,5 KPa obtainable with X=1 the rate of characteristic is the one of equation (3). This means that an equilibrium with the environment can be reached when the soil has a value of mix design as:

1541 KPa is the maximum recorded in the test of first peak for 20 g of H2O and 20 g of Soiltac. The hypothesis of 900 KPa is the value that theoretically corresponds to the maximum friction; see Orange Point in figure 2. The value of hydrothermal equilibrium of vapour with Soiltac can be computed also in another way. If the sample is considered as closed and the pressure controlled, the inertial rise of capillary fringe in case of partial saturation is:

Value is obtained considering the Atmospheric pressure as the weight held by the capillaries force in the vadose zone. The inertial weight can be assumed as 100 KPa, the ratio between 656,3 KPa and 100 KPa, without humidity variation is the ratio of 6,56 from equation 3. Looking at the table of figure 4, the expected value of Strength is 700 KPa. This is in line with the result of the first data in figure 1, where the composition of mix was 75 grams with 10 grams of H2O. The number 6.5 is the ratio between the stress in the solid grain chains and the permeated air. For a gas is the variation of Volume dV with the log of Pressure when the inter pore gas is compressed.

The possibility of filtration of the mix H2O and Soiltac is tested with an infiltration column experiment. Due to the viscosity of the preparation, the experiment is conducted with two different temperatures of the fluid mix. The first column is infiltrated with a fluid at 16-Celsius degree and the second at 48-Celsius.

he scheme of the two columns are depicted in figure 6.

Sand granulometric distribution is reported in figure 7. Sand has a narrow distribution and size of grains is quite constant between 0,1 and 0,3 mm.

Permeation is depicted in figure 8. Hot and Cold (in Italian Caldo and Freddo) are at Temperature 16 °C – and 48 °C , obtained heating the mix. This technique will be preferred to the over pressure for sand treatment in site. Results shows that mix filtrated in the hot case is faster see figure 9.

Figure 9 Depth in centimetres and time of filtration

Ongoing lab program is verifying the additive treatment and its duration in real problems, like the foundations improvement for Seismic Retrofit. The graphs in figure 10 reports the worst case of 10 sample treated. Sample is cured for 1 week and after immerged into pure water for 1 week as depicted in figure 13. The second sample has reached after 14 days has reached 1090 KPa and now it is immerged for test during wetting.

Figure 10: Treatment of loose sand with 80 grams of Soiltac and imbibition: shear vs axial strains

Figure 11 reports the effect of curing with time. The chemical reaction of Soiltac is tested with a Mechanical characteristic after 7 days and 14 days. The increase is noteworthy the peak strength changed from 340 KPa to 1090 KPa. If 1/3 is expected the wetting sample should have a strength of 330 KPa after full immersion in water.

6)   Example of Engineering Computation for Undrained Condition in Static and Dynamic Condition (Example):

Foundation is verified for Static Conditions.

With 50 KPa of cohesion Soil is classified in group S1: Risk of Liquefaction

With the worst estimate, the category of the Soil can pass to D and avoid FEM analyses:

Displacement for Design and Creep:

Starting from CALSS A and multiplying for 1.5 for CLASS D, the displacement and acceleration are obtained by EC8 and EC7.

From Sequoia Monitors GEA, the day-by-day Records can be compared with the MAX of INGV. Equation is

Values are obtained dividing by 3 the dg and vg found with Return Period of 950 years 0,063 m and 0,165 mm/s and considering the distribution of the velocity in the domain of Frequency as energetic value associated with the maximum F (Hz) (circa 1/10 of peak in Vertical Direction)

Soiltac is very effective for the aim of sand consolidation under wave transit monitoring and for retrofit intervention. The formula of Terzaghi for shallow foundations in undrained condition is:

Increasing cohesion of a very loose sand from 50 KPa to 500 KPa is an improvement of the 1000% (approximatively) due to the linearity of the Standard Formula.

Permeability and feasibility of treatment is tested with infiltration columns. Tests have shown that heating the fluid mix, the soil can be wetted easily and without machinery, the viscosity can be reduced with heat only in the treatment phase during filtration.

Assessment of Retrofit, even with the worst results from the cured samples set, can be done without FEM analyses and complex models. An analysis of Seismic Design Improvement is verified passing from Category S1 Risk of Liquefaction to Class D with kinematic values for the Structural Design without using FE computation. The value are checked with Monitors. Better performance is expected for longer period of curing,

9)   References for the Innovation Technology. 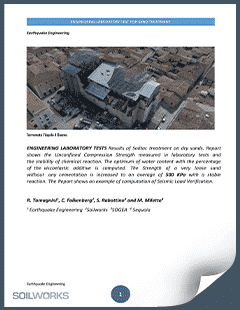