Note: Discussion on this paper is open until June 2020

The increasing of CTB cement content contributed to stiff base material and susceptibility to brittleness (Abboud, 1973; Sariosseiri and Muhunthan, 2009). According to Scullion (2002), reductions in CTB volume induced cracks in the CTB layer that effected to the damage of pavement surface. This means that the cracking became more pronounced with increased cement contents. Therefore, the cement stabilization is banned for road construction in many countries (Guthrie et al., 2002). Besides, previous research investigated the mechanism to minimize CTB cracking damage (Norling, 1973; Wang, 1973; Teng, and Fulton, 1974, Mohammad, 2006).

According  to  Assaad  J.J.  (2018), styrene-butadiene rubber below 0.4% of cement mass and polyvinyl acetate below 0.3% of cement mass improved the tensile and adhesive (bonding) properties of the soil cement. Naeini et al. (2012) studied clayey soil mixed with bentonite and various polymer contents (0%, 2%, 3%, 4%, 5% by soil weight), and reported that the strength of treated soil was inversely correlated with plasticity index. Ateş (2013) investigated the effect of vinyl acrylic copolymer and cement on sandy soil by varying the polymer between 1%, 2%, 3%, and 4%; and cement between 10%, 20%, 30%, and 40% by soil dry weight; and documented that the unconfined compressive strength was positively correlated with polymer and cement contents.

From the usefulness of polymer and cement mentioned above, the polymer can improve the flexibility, durability, and water proofing of soil cement. The tensile and adhesive properties of the soil cement have been improved due to the reduction of cracking damage. Therefore, the concurrent use of liquid polymer and Portland cement as a reinforced material in crushed rock pavement base was proposed in the study. The strength of polymer-treated crushed rock (treated crushed rock) and ordinary crushed rock (untreated crushed rock) were characterized and compared. The California bearing ratios of untreated and treated crushed rock were determined under unsoaked and soaked conditions in order to simulate the post-flood pavement damage. Furthermore, the unconfined compressive strength under unsoaked condition was evaluated and reported under variable curing durations from 2h to 28 days.

In LL analysis, 15 g of untreated crushed rock was first mixed with tap water and deposited in the cup of Casagrande liquid limit device and the surface smoothened. In this research, the initial moisture content was 17.46%. In the analysis, the cup was dropped 10 mm on the hard rubber base at a rate of 2 blows/second and terminated when the groove closes a distance of 12.7 mm and the number of blows recorded. A small sample of untreated crushed rock was taken, and the water content determined.

Fig. 2. The compaction curve of untreated and treated crushed rock as a function of dry density and water content

According to ASTM D1557, the modified proctor compaction is a function of the dry density and water content of a material. In compaction analysis, this research determined the maximum dry density (gd, max) and optimal water content (OWC) of untreated and treated crushed rock, and the OWC was subsequently used for analysis of California bearing ratio (CBR) and unconfined compressive strength (UCS).

In the preparation of untreated and treated crushed rock samples, tap water of arbitrary amounts (i.e., five variations each for untreated and treated crushed rock) was added to the crushed rock and manually mixed until the color and texture became uniform. The mixture was transferred to cylindrical molds of 152.4 mm in diameter in sequential order of five equal amounts of crushed rock (to the mold top surface). Each layer of crushed rock was compacted 56 blows, using a 44.48 N hammer dropping from a height of 457.2 mm, equivalent to 2700 kN-m/m3 compaction effort (approximately 4.5 times that of the standard proctor test), before subsequent layer was deposited into the mold and the procedure repeated.

In CBR analysis, the untreated and treated crushed rock passing sieve#4 were mixed with tap water (5.10% and 5.20% OWC, respectively) and kneaded. The rocks were transferred to cylindrical molds of 152.4mm inner diameter and 177.8 mm in height (three molds each for untreated and treated crushed rock)  in sequential order of five equal amounts of crushed rock (to the mold top surface). Each layer of crushed rock was compacted 10, 25, and 56 blows, using a 44.48 N hammer  dropping from a height of 457.2 mm, before subsequent layer was deposited into the mold and the procedure repeated. The crushed rock samples were subjected to axial loading by a penetration test machine with 50 kN maximum capacity and 0.00001 – 5.99999 mm/min speed (CONTROLS Triaxial tester T400 Digital).

In penetration testing, a 10-pound surcharge weight, comprising two five-pound circular discs, was placed on top of the surface of untreated and treated crushed rock (unsoaked samples). A steel penetration piston of 50 mm in diameter connected to proving ring was inserted through the center point and penetration carried out at a rate of 1.27 mm/min. The load measurements corresponding to the following deformation were taken:

In this research, unconfined compressive strength (UCS) was determined for treated crushed rock under variable curing periods, in accordance with ASTM D2166. In UCS analysis, 6000 g of treated crushed rock was first oven-dried and mixed with Portland cement (210 g) and diluted polymer (10.5 cc liquid polymer / 390 g tap water). Tap water (at 5.20% OWC) was added to the mixture for maximum dry density (2.32 t/m3), as shown in Figure 3.

The mixture was transferred to cylindrical molds in sequential order of five equal amounts of crushed rock  (to the mold top surface). Each layer of crushed rock was compacted 56 blows, using a 44.48 N hammer dropping from a height of 457.2 mm, before subsequent layer was deposited into the mold and the procedure repeated. The crushed rock samples were extruded from the mold and cured in open air environment for 2 h, 1 day, 3 days, 7 days, and 28 days. The experiments were carried out in triplicate. The diameter and height of cured samples were measured by Vernier caliper, and the weight taken.

Table 2. Comparison between untreated and treated crushed rock under unsoaked and soaked conditions given 10, 25, and 56 compaction blows

In essence, the concurrent use of liquid polymer and Portland cement improved the strength of crushed rock as pavement base material. Furthermore, the polymer- treated crushed rock could effectively mitigate the post- flood pavement damage.

Ateş, A., 2013. The effect of polymer-cement stabilization on the unconfined compressive strength of liquefiable soils. International Journal of Polymer Science. 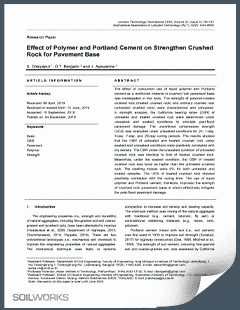