Field Manual for use of Soiltac in Geotechnical Design PILES (TPD2004010)

The stability of the chemical bonds are guaranteed with humidity condition of 100% (full immersion into pure water) applied for 1 week.

SAMPLE TREATED IN COLUMNS AND WETTED AFTER 1 WEEK: BRITTLE FAILURE

The wetting after curing has produced a shear band.

The critical state has been reached with a discontinuity and the flux of vapor was not due to homogenous filtration from the porous matrix.

Comparison with data of Mokni and Desrue (1998) explains the role of cavitation. 3% of fluid volume has divaricated the sample with a 30-degree inclination of the shear band.

Mokni and Desrue (1998) shows that in biaxial tests crl/cr2 = constant until the initiation of shear band, for each water pressure.

It means that Ko is constant and also the soil bearing capacity in Bi Axial test,

Liquefaction is the condition of biaxial rotation of 3rd invariant.

Sample of laboratory at SOGEA Roma is:

Tare was consistent but geometrical boundary not, the 3D effects in Undrained Conditions requires FEM but Fluid is disregarded with Viscosity and time. Use of Soiltac allows to treat 3D modelling without FEM and using Wave Speed Monitors. Check against liquefaction is obtained with sealing and coating by the Polymer. Softening is modelled with Wave Trace monitoring and Spectrum Analysis.

Figure 4 Reports the Unconfined Compression Test after Curing (40/50 days at hygroscopic humidity of the atmosphere, figure 5 after full immersion in water for 1 week (after the cured period)

Samples were than wetted to verify chemical stability. Wetting took place for 1 week into pure water at 100% of humidity. This condition for a standard infrastructure designed to be on land is not realistic. It explains the treatment can be used in very humid regions.

A treatment of soil foundation with Soiltac can prevent liquefaction, a condition in which soil exhibits a behavior like a fluid: mud in case of a threshold of dynamic inertia.

Long term must not be compared with the RETURN PERIOD of 750 years, that is a probability. In case of lsLv of a new bridge the dimensioning is for the event a/g of the site (see INGV), but with the REAL TIME OF OPERATIVTY, generally 100 years with coefficient of utility of an infrastructure. It means, if the treatment is cheaper because it does not change the dimensioned structure, owner can check the performance of the bridge with SEQUOIA piezoelectric accelerometers in the meantime and repeat the treatment.

Masonry building are brittle structures and increase of mass for structural retrofit would not occur. See Marble/ Travertine churches.

The samples are prepared remolding loose sand with a mix of 300 grams of water and different concentrations of polymer SoiltacÒ.

The optimum is computed considering stability of Entropy production, i.e. chemical activity of Soiltac into the pores and stechiomtric balance with environment after 4 days.

The probability of findings bonds generated by Soiltac molecule is assessed by a single test after 50 days.

SHORT TERM OF SAMPLE WITH DIFFERENT CONCENTRATIONS OF SOILTAC

The points are correlated with logarithmic function in order to visualize the optimum for mix design. Correlation value is low, in order of 83%, but the number of samples is only 6. Equation can be written as

Maximum value of Resistance to Shear Sliding is for ln(X) = 0, that is X=l. The value of 1, represents the mass stoichiometric equilibrium of the 2 fluids. In this case UCS is 1741,5 KPa.

However, this value is not the value that represents the environmental equilibrium because water content can change due to rainfall or hygroscopic oscillations.

To obtain the hydrothermal equilibrium, the derivative of Entropy must be zero, when X=1:

For the maximum value of 1741,5 KPa obtainable with X=1 the rate of characteristic is the one of equation (3). This means that an equilibrium with the environment can be reached when the soil has a value of mix design as:

1541 KPa is the maximum recorded in the test of first peak for 20 g of H2O and 20 g of Soiltac. The hypothesis of 900 KPa is the value that theoretically corresponds to the maximum friction in short term; see Orange Point in figure 2.

Soiltac® has been designed for dust control with surface tension. It is very suitable for the control of dynamic load on sands. It prevents cavitation of water. The coalescence of vapor into the porous space allows increasing stiffness and strength.

RESULTS BY R. TAMAGNINI (2011) THAT DEMONSTRATE THE EFFECTIVENESS OF IDEA

Geotechnical scientific publications rarely report a measure of fluid phase compression, because water liquid is considered uncompressible in fully saturated sands. Numerical and geotechnical analysis of a constant volume test for nuclear waste management is reported in Tamagnini (2011). Paper shows feasibility of the proposed technology. The two clay samples (then with a cohesive matrix) are compressed with the air pressure to verify the confinement for the water flow impermeability. Romero (1999) at UPC Universita Politecnca Catalonia produces data. Changes in thermal value of T, the temperature, is due to the amount of stocked nuclear fuel. The vapor – water phase % changes during air decompression and re compression, the second compression simulates the Entropy cycle. Phase transformation gas-liquid does not allow an increasing in the thermal value of T (constant temperature). Phase changes are convenient for the Retrofit, because old designs are Formula without Temperature (Terzaghi effective stress). Data are obtained during the HADES Project, financed by UE, on the Thermal behavior of the Boom clay; Boom is the region of Mol in Belgium, where the SCKN research center is located. Results are depicted in figure 1.

DISCUSSION OF LABORATORY TEST OF ROMERO (1999)

Pressure wave applied by a seismic event can be assessed by suction cycles 500/0 – 0/500 KPa, the vertical axis of the upper diagram. Suction and capillary stress are represented by the difference in the applied air/gas pressure ua and water pressure uw: (ua – uw). The second parts of the tests: A1-A2 and B1-B2 show irreversibility in the records of the Net mean stress. Entropy is a state variable only and only if irreversibility does not occur. The nonlinear hysteretic data shows that sample has changed position during a phase transition. This is due to the fusion of gas in liquid vapor; the process is not reversible without heating the sample with a source. Confinement is reported by the value of Net stress between 0 and 500 KPa: with an increase of the 20% of density (from 13.7 KN/m3 to 16.7 KN/m3) the sample has shown mechanical stability. Test with “loose” at 13.7 KN/m3 shows that the suction cycle, and then the seismic wave transit, has produced a condition in which shear decreases (Dev. measure) in both cycles compression – decompression, and softening occurred. Confinement is Net mean stress = 0 KPa at the end of the second cycle. The end of the second cycle is the Liquefaction in Earthquake Engineering – FEM modelling.

At the suction values of 1000 KPa and 2 KPa, in the first cycle of decompression,

In the two cases: the uplift of the foundation starts at 1000KPa. In the first (13.7 KN/m3) the double of the phase space W = 120 x 2 = 240, has produced Liquefaction or Friction Sliding, in the second test dense (16.7 KN/m3</sup>); g (gravity acceleration) has produced only a radial deformation, and it occurred in the first cycle, corresponding to 180 KPa of deviator stress. Second cycle of recompression does not increase softening for 16.7 KN/m3.

To obtain the same result with a Frictional test the weight of the building should increase of 3 times.

In case of use of Soilworks – Soiltac, increase of strength is obtained with the increase of fluid density, passing from gas to liquid. In case of partially saturated sands, the matrix is compacted removing the capillary forces induced by menisci.  In saturated sands the effects is induced with the viscosity of fluids. Thermal capacity of sand grains is higher than atmosphere, after permeation the fluid mixed with water exchanges heat with solid grains and cooling induces increase  in viscous – plastic response (see test by SOGEA) .

Reducing the Reynolds number of 1000 times:

2.3 is the ratio between solid density and water density, 3 are the direction of force control.

EXPLANATION OF PHENOMENA OF HYSTERESIS IN BOOM CLAY WITH TEST OF LABORATORY S3 GRENOBLE. MOKNI AND DESRUE DATA ON BIAXIAL TEST

In order to explain the method developed by Earthquake Engineering the data of are discussed, The photogrammetric display of figure 6 shows with arrows the displacement vectors during shearing,

The graphic representation of the shear versus axial strains is figure 3 with ratio of the vertical on horizontal effective stress.

DISCUSSION OF DATA WITH USE OF BOLTZMANN ENTROPY

The spring compression applied by the soil reaction to shearing is:

9 -12 % after shear band forming ½ of sample is pushed in the Vertical Gravity direction other half is orienting s1 stress.

Probability of finding representation between photogrammetric and graphic data for 1 completed sample is:

If d = ½ mv2 is the integral of the flow and S can be referred to Reynolds. The 3 % of water is adsorbed by environment.

Figure reports the effect of time on strength. The dry loose sand is mixed with a fluid mix that interacts with laboratory environment; curves are the stress strain behavior after

DISCUSSION OF RESULTS ON VAPOR CONTROL

PHYSICAL PRINCIPLE OF THE INTERACTION BETWEEN GAS/WATER/SOLID – SURFACE

STIFFNESS FROM LABORATORY TESTS IN ROMA ON SAND

Entrapping the gas phase with Soiltac the axial deformation was for 1 point of the foundation 140.000 KPa. Before the treatment, it is not possible to estimate it with same method. The geophysics suggests that:

V (shear wave) should be = 48 m/s (27 m/s for remolded) that is too low, because the sand has the consistency of a Rock. This is the result if the sample is considered homogeneous only 1 phase. Empirical correlation Robertson

The innovation is to correlate Vs with filtration, according the Entropy

With Soiltac permeability can be reduced by many orders of magnitude, if the loose sand had 10-4 in dry state and it passed to 10-8 in very compacted (an extreme)

The scheme of computation of the Broms theory for horizontal action is Hysteretic, what does it means?

THE HORIZONTAL RESISTANCE IS THE SAME AFTER 3d, 3 times

the Diameter. How is it possible?

Why is so LONG?

Because in Static Condition the load is VERTICAL

For LONG PILES, the quantities on the X and Y-axes have Cu at the denominator.

A reduction to 8,5% that means 91,5% of ACTION INCREASE ACCORDING THE SAFETY FACTOR, of the Horizontal DESIGN FORCE of the Original Design is SUSTAINABLE DURING THE PEAK ACCELERATION OF THE CATASTROPHIC EVENT. 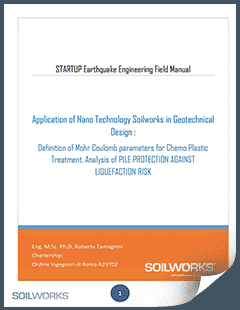