The new-look Spreckels Park BMX track reopened to the public last Monday, Aug. 24, but the work is far from finished.

Not that Jon Anderson minds.

The shop owner of Anderson’s Mower and Bike and figurehead of Anderson’s 209 BMX team can be found at the former storm-retention basin located on the corner of Spreckels Avenue and Moffat Boulevard almost daily along with his loyal volunteers doing what needs to be done for riders of all ages to enjoy the updated track.

With full backing from former Manteca mayor Willie Weatherford and City Council, the track was dedicated on May 6, 2010 but had not undergone any major upgrades since. The possibility of that happening changed in June of 2017 when Steve DeBrum, who succeeded Weatherford as mayor, helped secure $60,000 of “Bonus Bucks” for Anderson’s non-profit group that is largely responsible for maintaining and operating the site.

“My wife Cathy was very instrumental for that,” Anderson said. “Without her behind the wheel I don’t think we’d be here right now. She’s behind the scenes dealing with paperwork and getting stuff done. I can’t do it because I’m working at my shop all the time.”

The course was redesigned and built by Lance Maguire of Dirt Trendz, whom Anderson lauds as “the premier track builder in the United States.”

The most notable differences are the three asphalted berms and layers of Soiltac coating that hardens the track and helps combat erosion. Anderson and his crew are still adding Soiltac to the track and there are plans to add lanes.

“It’s complete for the sake of use, but we’re perfectionists, I guess you can say,” Jimmy Dean said. He’s a track volunteer and longtime friend of Anderson’s since the 1970s. “We’re trying to make it as good as we can possibly make it.”

They tout Spreckels Park BMX as a go-to track for both beginner and advanced riders to visit from all over the state.

“It was definitely ride-able (prior to renovations) but now everybody wants a pristine, skate park-like setting,” Anderson said. “It’s not like

Elk Grove resident Jocelyn Kutzen powers her way up the steepest bump leading up to the second of three newly-asphalted berms at Spreckels Park BMX track on Monday. – photo by JONAMAR JACINTO/The BulletinJimmy and me riding back in the day when we were racing on anything and didn’t worry about it.

“At this point the way the track is right now,” Anderson added, “I would say it’s probably the best track in California. I would put it up against any track.”

It is open every day until sundown, and before COVID-19 struck the track was host to American Bicycle Association-sanctioned events every weekend. Anderson and his organization also held beginner’s clinics once a month, a program they are eager to revive post-pandemic.

“We get everyone out here from every walk of life and on any kind of bike,” Anderson said.

This destination spot would not be possible if not for the efforts of Anderson and his volunteers, whose efforts have saved the city anywhere from $15,000 to $28,000 per year.

“For it to get this much traffic and still be kept in the same condition, that’s where the volunteers and the manpower comes in,” volunteer Dennis Close said. “It has held together pretty well for the last 10 years. Everyone’s been dying to ride it because they’ve had two months to look at it.”

Camden Barrington, 6 of Elk Grove, keeps up with Lathrop High senior Hailey Hunter on Monday as they barrel toward the final berm at Spreckels Park BMX. – photo by JONAMAR JACINTO/The Bulletin 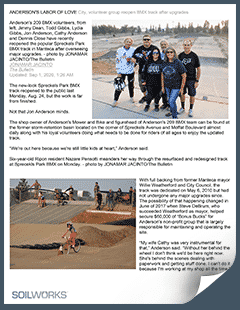