Submitted by Captain JC Luttmann To

Today Marines find themselves operating increasingly in desert environments. These environments pose a great deal of problems for the operating forces. Helicopter crews are particularly concerned with brownout conditions. Brownout can occur during the takeoff or landing phase of flight when the rotorwash generated downward from the helicopter picks up loose sand and dust. These airborne particulates can cause the pilot to lose visual acuity with the ground. Thus an unintentional drift may develop causing the aircraft to strike an obstacle or hit the ground with excessive rate of descent or airspeed.

Although many aspects of helicopter flight can be performed utilizing solely an instrument scan, landing and hovering are not. Hovering requires an active outside scan and a visual ground reference. Helicopter operations such as externals, fastroping, and rappelling require the aircraft to maintain a hover for extended periods of time, making the aircrew particularly susceptible to brownout. In fiscal year 2002, six of the Army’s twenty-six Class A mishaps were caused by brownout or whiteout conditions.1 Obviously good piloting skills will prevent many brownout mishaps, but more steps need to be taken. The problem of brownout can never be fully eliminated; however, a smart application of environmental, mechanical, and training assets and practices will mitigate the risk and preserve personnel and equipment to fight another day.

The following is an account of an Army helicopter mishap in which brownout was named as a causal factor:

The UH-1 was operating in an area that had been heavily used by tanks. The last mission of the day was to conduct an orientation flight of the mock battle area. The crew picked up their four passengers and had completed about one-third of the flight when they spotted a soldier walking along a tank trail. Thinking it strange that anyone would be on what they thought was an impact area, the crew decided to land and investigate. The aircraft landed about 35 meters from the tank trail, and the crew chief got out to talk to the soldier. The soldier was looking for his helmet that had been lost earlier that day. The crew chief offered him a ride back to the observation point, and the soldier and the crew chief got into the helicopter. The PC, who was flying the aircraft from the left seat, took off. But before the aircraft reached translational lift, it was engulfed by powdery dust blown up from the tank trail by rotor wash. The aircraft drifted to the right. The PC knew there were trees in front of the aircraft, and he pulled in torque and turned to the right to avoid a 55- foot tree. The aircraft had flown about 380 feet when the blades hit four trees in quick succession, then hit the ground nose-low, rotated on its nose, and rolled onto its left side. The crew and passengers escaped with minor injuries. The PC had experience flying in both dust and snow, and he knew the area from which he was taking off was dusty, but he didn’t expect a brownout. When he took off, he applied forward cyclic instead of using collective to establish a climb, which would have allowed him to fly out of the brownout conditions.2

One way to address the brownout problem is to alter the environment itself. Dust abatement compounds have been used with varying degrees of success in Afghanistan and Iraq. There are many different dust abatement agents on the market which operate under different principles. Some require water, while others simply need to be raked into the soil. Not only do the compounds improve visibility, but they also prevent helicopter maintenance problems due to dust erosion.3 Continuous sand bombardment can cause serious damage to helicopter dynamic components. The fiberglass rotor blades are subject to erosion as sand strikes the leading edge of the blade with each rotation. The engines themselves are vulnerable. Sand ingested into the engines erode the compressor blades and can lead to a degradation in power or even an engine failure.

Gravel is another more permanent solution to the dust problem. The best results are achieved when gravel is used alongside dust abatement compound. Capt Shawn Miller, the logistics officer for Marine Wing Support Squadron (MWSS) 273, commented on the use of gravel and tri-pam during OIF II in the following statement:

“Gravel is a permanent dust abatement solution,” said the 36-year-old Detroit native. “We will use a light dusting of tri-pam to minimize the dust on top of the gravel, but other than that, (the airfield) will be gravel.” Tri-Pam, a mixture of aluminum chloro-hydrate, poly-acrimide and super-absorbent substance, was tested in 2003 and has been used at several FOB’s and FARP’s during Operation Iraqi Freedom. According to Miller, gravel is also the preferred method of dust abatement for some of the large rotary-wing aircraft landing here because of its ability to maintain its consistency.4

Although these environmental measures are very effective in preventing brownout, they come at a significant logistical cost. A large water source needs to be present to mix the agent along with a vehicle mounted mechanism for dispensing the compound. A seeder truck was used at Forward Operating Base (FOB) Al Qaim in western Iraq with great success; however, seeder trucks are not on the Table of Equipment (T/E) for the MWSS. Although environmental measures are effective in preventing brownout conditions at established FOB’s and Forward Arming and Refueling Point’s(FARP) they do not address those same conditions at more austere locations.

Mechanical measures seek to defeat brownout by altering the aircraft itself. Sierra Nevada Corporation has proposed the guided launch and recovery system (GLARS),5 currently being tested on UH-1 helicopters by the Army at Fort Eustis, Virginia. The system integrates with the installed radar altimeter and cockpit display to provide very accurate hover information.6 An improved flight page and hover page are provided. The hover page gives the radar altimeter reading, a rate of descent/ climb bar, heading indication, zero velocity reticle, and horizontal flight path indicator.7 The zero velocity reticle is the center point of the display and is representative of the helicopter in a perfect zero velocity hover. The horizontal flight path indicator shows deviations from this zero velocity center point. The pilot is able to see via the display any fore, aft, or lateral drift. He is also able to see at what velocity he is drifting.

The obvious advantage of the GLARS is that it integrates with existing helicopter equipment. The next step is to augment GLARS with look down radar imaging. An imaging radar would provide two fan beams tilted forward during the helicopter approach phase and tilted downward for hover operations. The pilot would be provided a 30 degree by 30 degree coverage window.8 The GLARS hover page symbology would be superimposed on the ground radar image.9 Although the GLARS will not eliminate brownout mishaps, it is a excellent tool for pilots that find themselves in dusty environments. The GLARS is a step in the right direction because it provides a display which is specifically designed for the helicopter.

The third proposed method of brownout mitigation involves combining an environmental and mechanical solution. This method

takes the form of dispensing dust abatement compound via an aerial platform.

The CH-53E Super Stallion helicopter is the vehicle of choice because of its large payload. The CH-53E could be used similar to a firefighting helicopter, by dispensing water soluble dust abatement compound from a bambi bucket. The bambi bucket is basically a lightweight bladder which can carry between 72 and 2600 gallons of water (depending on the model).10 It is a proven device which has been used in firefighting applications for many years. However, the method has not been adequately tested yet. The problem is that the CH-53E would be carrying the bambi bucket as an external load. Therefore, the aircraft would be severely limited in its airspeed and maneuverability while it is carrying the load with obvious drawbacks in a tactical environment where the aircraft may need to maneuver defensively or evade a threat.

CH-53E as a crop duster and may pose a problem in perception. The aerial delivery of dust abatement compounds could be perceived as the use of chemical or biological munitions.

Pilots have a significant learning curve to proficiently fly in brownout conditions. They must be exposed to these conditions during training so that there is a point of reference when the bullets are flying. The time to learn skills is not on final approach into a hot landing zone with combat troops onboard. Pilots need to operate in environments where brownout conditions are prevalent. The Marine Corps does a good job of this. Helicopter squadrons routinely participate in training exercises in Twenty Nine Palms, California. The training area encompasses a significant part of the Mojave Desert. Here pilots learn appropriate techniques to safely operate the helicopter in a dusty environment. The Marine Corps also trains its helicopter weapons and tactics instructors (WTI) at Yuma, Arizona, providing pilots another good location to hone their brownout techniques.

While developing a program for U.K. helicopters, the firm had written software to simulate the spume effects that occur when rotorcraft operate over the ocean. The engineers tweaked it and presto — algorithms that once produced simulated mist instead generated a virtual dust storm.13

Brownout is a costly problem which will not diminish in the foreseeable future. As deployments continue to send the military into the “Cradle of Civilization,” pilots and aircrew will find themselves dealing with the realities of desert flying. Significant progress has been made in the use of environmental dust abatement methods. Time and effort also needs to be applied to mechanical and training methods. Although brownout will never be eliminated, it can be mitigated if it is battled on all fronts. The Marine Corps cannot afford to overlook the gravity of this problem. A smart, multi-faceted approach to brownout will preserve precious resources to fight another day. 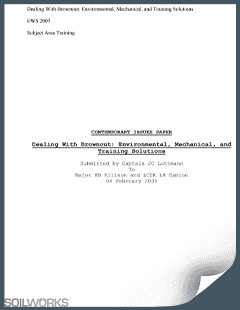