soil classification. The analysis of the test resulted in the conclusion that the unsurfaced (compacted soil) airfields behave differently than traditional pavements. A model was developed for these airfields to predict the operational life of the pavement. Evaluation methods were identified that can be used to structurally characterize airfields.

Point of Contact: For technical assistance regarding the structural field testing during C-17 aircraft operations, contact Mr. Jeb Tingle at (601) 634-2467 or e-mail at TingleJ1@wes.army.mil. General information on the WES is available on the web site at http://www.wes.army.mil. 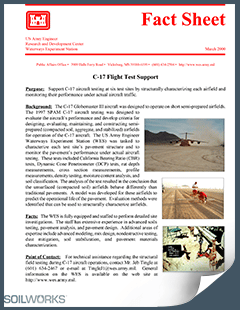